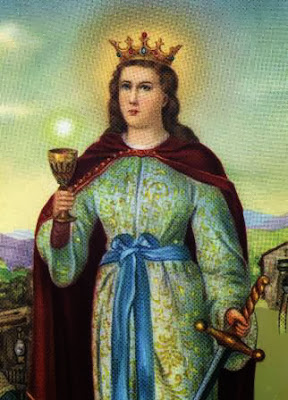 Chàngó (Shango, Xango) is the Yoruban orisha of lightning, dance, thunder, power, passion, and sensuality. He is said to have royal lineage as the third king of the Oyo Kingdom of West Africa. Chàngó is very popular and often petitioned to win wars, defeat enemies, gain power over others and ensure victory over all difficulties. According to Yoruba belief system, Chàngó hurls bolts of lightning at the people chosen to be his followers, leaving behind imprints of stone axe blade on the Earth's crust. These blades can be seen easily after heavy rains. Chàngó altars often contain a carved figure of a woman holding a gift to the god with a double-bladed axe sticking up from her head. This is said to represent the devotee is possessed by Chàngó (http://en.wikipedia.org/wiki/Shango). 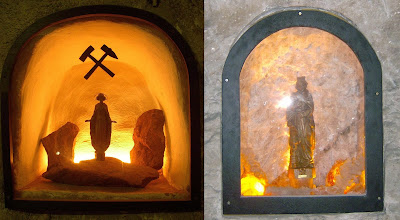 Saint Barbara is often referred to as an obscure saint who lived during the times of the pagan persecutions. She is said to have been quite beautiful and to be kind and helpful to the poor. As the story goes, her father, Dioscorus, was a follower of the pagan Roman religion and was very rich. At the time, the new religion was Christianity and it was mostly associated with poor people. He father did not want his daughter to associate with poor people or Christians, so he locked her away in a tower, where she stayed for years. Her only exposure to the outside world was getting food and laundry by means of a bucket that was raised up and down her window. Her father brought her potential husbands of his choosing, but she had lost all interest in getting married and she was certainly not interested in anyone her father picked out for her.

One day, when St. Barbara raise up her bucket someone had placed a bible inside. Intrigued, she set about reading and studying it. Shortly thereafter she became ill. She asked for a particular doctor to come treat her and unbeknownst to her father, it was a Catholic priest. At that time she was baptized a Christian.

According to the Catholic Encyclopedia (1913):

Before going on a journey her father commanded that a bath-house be erected for her use near her dwelling, and during his absence Barbara had three windows put in it, as a symbol of the Holy Trinity, instead of the two originally intended. When her father returned she acknowledged herself to be a Christian; upon this she was ill-treated by him and dragged before the prefect of the province, Martinianus, who had her cruelly tortured and finally condemned her to death by beheading. The father himself carried out the death-sentence, but in punishment for this he was struck by lightning on the way home and his body consumed. Another Christian named Juliana suffered the death of a martyr along with Barbara. A pious man called Valentinus buried the bodies of the saints; at this grave the sick were healed and the pilgrims who came to pray received aid and consolation.


St. Barbara is invoked against thunder and lightning and all accidents arising from explosions of gunpowder. She is the patron saint of artillerymen, military engineers, gunsmiths, miners and anyone else who worked with cannon and explosives. She is venerated by Catholics who face the danger of sudden and violent death in work.

Shango, http://en.wikipedia.org/wiki/Shango
Posted by Denise Alvarado at 12:00 AM No comments: